Hieroglyphs of a world model of a Navajo rug

In recent decades, I have identified the symbol sets of several American Indian folk art objects with the signs of Szekler writing (more precisely, its predecessor using logograms, the Hungarian hieroglyphic writing). The approximate 30 common Native American-Hungarian word and sentence symbols provide an opportunity to approach the meaning of short texts on American Indian folk art objects (1). It is tempting to also explore the sound form of similar Native American texts, but this would require a more thorough knowledge of American Indian languages.

The purpose of this article is to draw the attention of American researchers and seek help by presenting the word signs of a Navajo rug (Figure 1). Thanks to Hédy Csákvári for the photo of the carpet.

As it would be impractical to renegotiate general questions that may arise during reading in each article, I recommend that the reader read the book “Hungarian hieroglyph writing”. 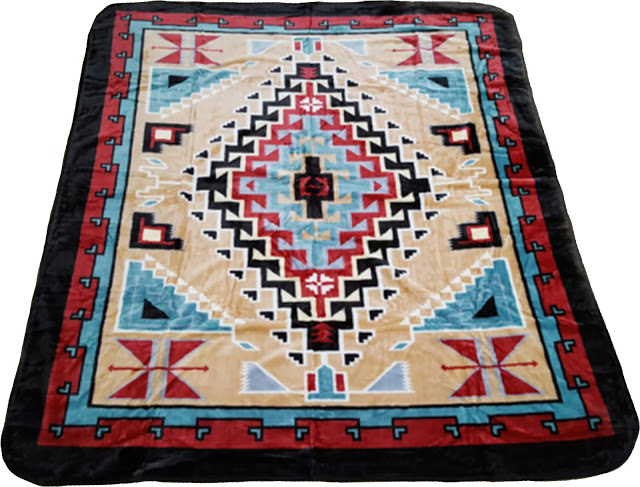 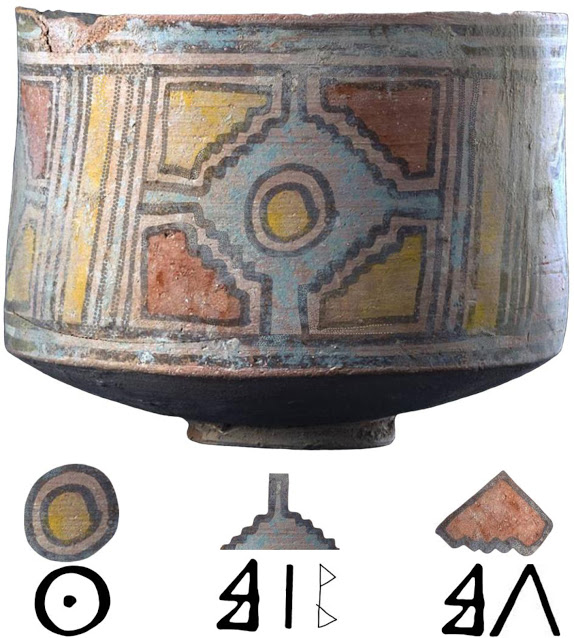 1 / b. figure. Pakistani vessel from Indus Valley culture (above), the corners of its world model have the same high corner(s) sentence symbol (in the lower right corner of the figure along with the Szekler high and corner word marks) as we can see on the Navajo rug 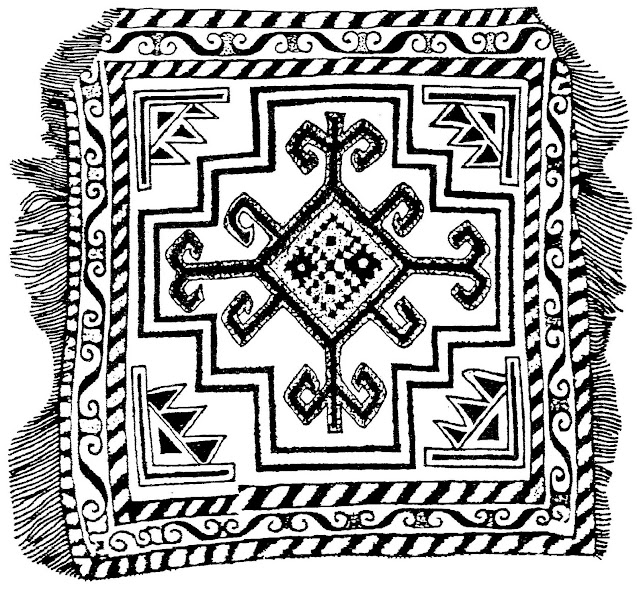 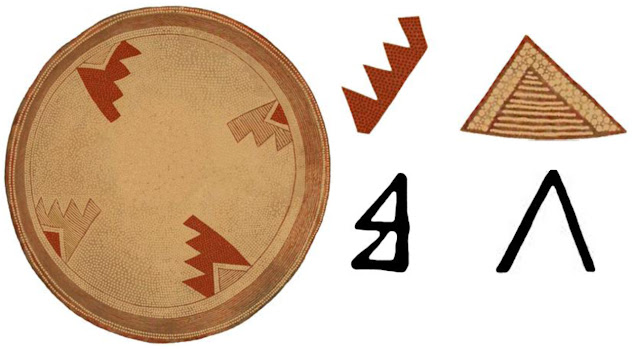 1 / d. figure. The corners of the world model of the Anasazi plate have the same high corner(s) sentence as above (the center of the plate is perforated, so the photo graphics here could not reproduce any central signals that may have been there)

The top view world model (mandala) is a representation convention that is widespread in both Eurasia and America. A map of the created and ordered world recorded with signs. The area it depicts (the Ararat region) actually exists, the common homeland of a significant group of Homo sapiens sapiens 100,000 to 50,000 years ago. I have wrote about this in my book „Symbols of the Hungarians”. As it is customary, which this Navajo world model conforms to, the name and/or sign of God is displayed in the center and the symbol of the path to heaven at the corners. The elements of the common set of symbols have changed somewhat in the long time since the separation, but they are still in use in Szekler writing. This provides an opportunity to understand the signs of the Navajo rug. We do not claim that short Indian texts can be given an accurate reading based on Hungarian signs. However, verification using Native American character sets and languages ​​can provide an excellent insight into the cultural-linguistic circumstances and, to some extent, the timing of migration to America.

A special value of the Navajo world model discussed in this article is that both the divine symbol in the middle (Fig. 2/a) and the corner symbol in the corners (Fig. 6) have good Eurasian parallels from the wider area of influence of the Scythian-Hun era. (2)

The central sentence that mentions God

The sentence in the middle of the world model, following a tradition found in some Eurasian hieroglyphic texts (Figure 3/b), states that the Earth belongs to God. Mentioning this tenure is just one of the peculiarities that binds the Navajo world model to Eurasian parallels.

Another parallel is the word God itself, which would have been a marker of  Hungarian ethnicity if it had not appeared in America (3). It definitely indicates the Native American-Hungarian ethnocultural kinship, which is supported by linguistic, folk music and genetic research, and which is considered and proudly taken by a large number of Hungarians. The word God also occurs in the legible decoration of a hopi bowl. 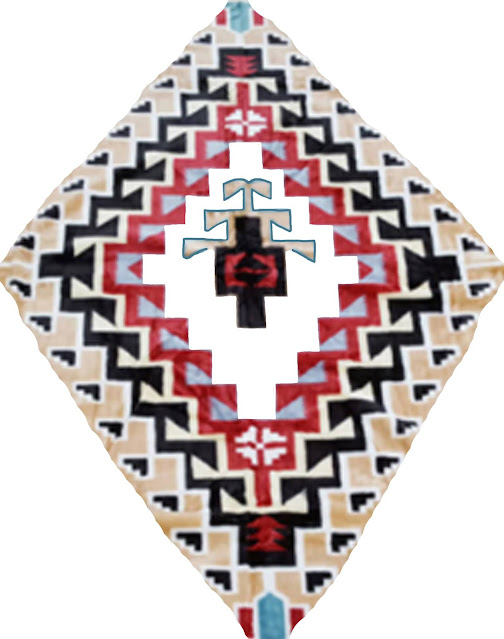 2/a. figure. In the center of the world model of the Navajo rug you can read (made up by five word symbols) the Ku god (Ku ancestor 'ten') with the text 'Lord of the Earth'. 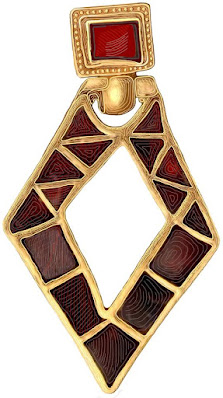 2 / b. figure. Hun jewel with the High Stone of the Brilliant Khuar (Lord Ku) from the Ehmann treasure find in Pilis, a kind of parallel to the Navajo god symbol

3 / a. figure. Word symbols of the central sentence of the Navajo rug mentioning God (above) and the corresponding Szekler "k" (Ku), 'ancestor', 'ten' symbols, the Hungarian folk art 'stem' hieroglyph and the "f" (Earth) symbol from the Szekler script (below) 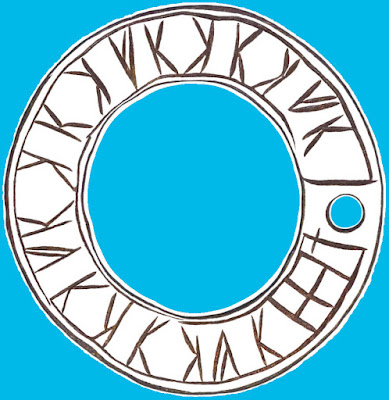 3 / b. figure. The hieroglyphic sentence of the clasp ring of the Árpádian period in Karcag also ends with the word symbol Earth, which is also a kind of parallel to the text of the Navajo rug.

Figure 4. The word of God (ancestor + ten) (left) of the Navajo rug and the Amur rock drawing from around 4000 AD, on the metal plate of the Lomovátovo culture defined by the Huns, and on one of the Hungarian finds from the time of the Hungarian conquest of Gyula

To evaluate the 'ten' word symbol, it is necessary to know that the symbol has split in two over time and two variants emerged from it. One has a single pair of branches and the other  has three pairs of branches. Therefore, the 'ten' variants in Figure 4 are equivalent and comparable despite the graphical variation.

The ancients thought the world was rectangular and the overhanging sky was hemispherical, so access to the sky was considered possible only at the corners of the Earth in contact with the sky. The corners had a separate god, or the corner was the same as God. For example, the word Hungarian corner does not accidentally resemble the root of Heracles' name. Heracles was the ancestor of the Scythians, whose columns on the edges of the world are also commemorated in the sources. Ultimately, a readable representation of these columns can be found at the corners of the Navajo rug (Figure 5). 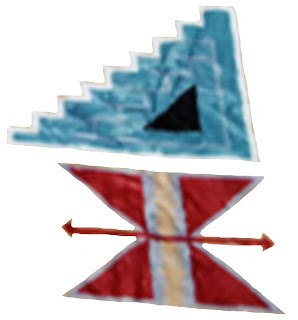 The characteristic corner symbol, which can also be observed on the Navajo carpet, is due to the structure of the landscape depicted in the top-view world model. This is because it is a representation of an existing geographical landscape. In the territory of Eden, also mentioned in the Old Testament. Four mountains (the Caucasus, the Elburz, the Zagros, and the Taurus) form the cornerstones of the landscape. To commemorate the corner mountains of the former homeland, there are still characteristic mountain representations on the corners of world models. These pictograms are similar in remote parts of the world because they were taken to America from Eurasia by migrants there thousands of years ago (Figure 5).

This sentence is the clearest evidence that the deservedly admired and readable decorative art of the American Indians may be closely related to the end-Eurolithic cultures of Eurasia, from which both Scythian and Hun culture grew. Due to the double meaning of the word sar, "Lord Corner," the sentence also carries the meaning of "High Lord." 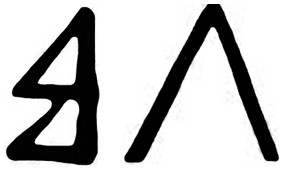 6 / b. figure. Components of the sentence symbol above the high shar (ok)  (high corner): the signs of the Szekler script "m" magas (high) and "s" (sar "lord, corner")

The Stone of the High Lord sentence symbol

The "High Stone" depiction convention evolved from a drawing on the left and right of the stepped tower church. The road to the sky serves as a staircase to symbolize its mountain peaks. Between these stairs it is customary to insert the name and / or token of the god who was revered on the stair-tower temple. 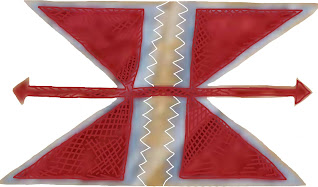 7 / a. figure. The stone of the Navajo High Shar ("Lord") is a sentence (the meaning of the horizontal line is unclear) 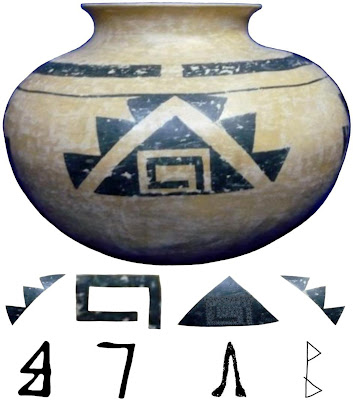 7 / b. figure. Jeddit vessel with the phrase stone of the High, Good Shar ("Lord, Corner"), with Szekler symbols corresponding to the Jeddito hieroglyphs at the bottom 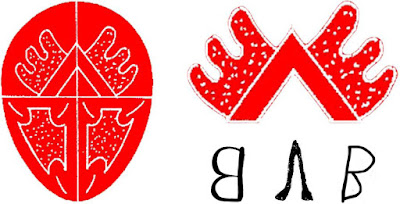 (1) We can interpret American texts on the basis of Hungarian signs because the results of the research carried out by the Research Institute for the History of Writing in Budapest over the past 50 years make this possible. New, surprising circumstances emerged about the birth of Szekler writing and writing in general:

Based on the Hungarian symbols on archeological finds and still in use to this day, 20-50 word symbols of the Hungarian hieroglyphic writing were widespread from the Pyrenees to South America as early as the Stone Age.

Geneticists have shown that some of the ancestors of the Siberian Huns reached America and became the ancestors of some Native American tribes. Since we Hungarians are also descendants of the Huns, we rightly research the kinship of Hungarian symbols of Hun origin in the folk symbol set of the American Indians. The peculiarity of this related set of Native American symbols is that similar symbols appear in all three Americans, in all sorts of tribes.

The readings in the article are based on Hungarian signs. We do not claim that an Indian password dictionary (if any) would give exactly the same reading.

The name Hungarian hieroglyphic writing does not mean that in the Stone Age it was the writing of a people who called themselves Hungarian, but only that this writing - to my knowledge - was best preserved by the Hungarians and could be learned on the basis of Hungarian data.

Since the right of explorers is to name the thing discovered, I chose the name of the writing system following the above considerations.

(3) The Navajo ten word appears above the ancient word in the composition (Figure 4). In some Eurasian parallels we see the same order, while in the other part we see the opposite. In related language material, there are also two orders of ingredients. The tenocs "god" on the Zürjén and the Hungarian isten (god) are in reverse order. In the name of Tenochtitlan is the name of the ancestor (god?) Who led his people to the area. The order of the name Tenoch corresponds to the order of the tenocs "god" composition in Zürjen.